The training plan calls for long rides on Saturdays, so last Saturday I figured I would take off on my bike and not worry about anything else. I didn’t bother to badger anyone into joining me, because if I’m not okay with riding by myself for hours and hours, then I have a serious problem.

But it was my birthday on Sunday (and my Dad’s), and since the gym is closed on Sunday, we were doing my birthday WOD on Saturday. I couldn’t skip that!

We take our deadlifts seriously at Prometheus CrossFit. The fact that this picture was taken during the Open 15.2 has nothing to do with the intent coaching gaze. Well… maybe it has a little something to do with it.

Last year Ben set the Rx weight for the deadlifts at 1.5x bodyweight. That’s a lot of weight. I showed up to the gym and figured that I would scale it down, especially considering that I was slightly hungover. Hey, it was my birthday, and we’d started celebrating early. And I put myself in the second heat cuz, again, it was my birthday and I was slightly hungover. But you know how it is when you show up at a CrossFit gym. The enthusiasm is infectious, and suddenly you start thinking that it’s your birthday WOD, you should do it Rx!

So last year it took me 24 minutes and 42 seconds to finish. Eesh. It was good though, I certainly wasn’t hungover anymore when I was done.

This year I was trying to talk myself into skipping it, justifying my slack with the need to go for a long bike ride. But Ben decided this year that it would be in everyone’s interest – probably most of all mine – if the Rx weight was set to 123 pounds for women, 185 for men. Well that sounds reasonable, so I rode to the gym and got it done in 5:22! Amazing what a difference about 100 pounds will make. 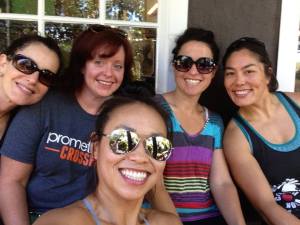 A typical Saturday morning gathering at Philz Coffee. Note that we don’t actually have any coffee yet. It takes a while since they make it one cup at a time. Hey, we have to amuse ourselves somehow while we wait.

And you know how the gym is, after the WOD it becomes time to go for coffee. This time rationalizing myself out of riding my bike, I reasoned that of course I had to have day-before-my-birthday coffee with my friends! It seemed like I was dangerously close to sandbagging the day, but it suddenly occurred to me once I had lots of caffeine in me that I should ride to Pacifica. My brother-in-law Troy had managed to convince Brooks and HB into joining him in floundering around in that particular portion of the world’s water that can’t decide if it wants to commit to being part of the sea or make one last giant effort to be on the land – they like to call it surfing – so I thought I’d join them. Well, not in the water. I’d just ride my bike to the beach and catch a lift with them back home. That would take my day’s mileage up to 50, a totally respectable number that would fit with my training program.

Once I decided that, I didn’t have much time to spare. I dashed into the coffee shop and bought snacks that would survive my panniers. I ended up getting some obnoxiously pretentious oatmeal cookies called the Health Nut Cookie or some such nonsense, even though the first ingredient was butter. And then I was on my way!

So to date, this was the longest ride I’ve done by myself. I was a little worried as I left, not because I thought I’d run into trouble, but because I thought I might not like it. If I got bored or lonesome riding my bike for hours without friends, then I would have some serious mental adjustments to make in the next few weeks.

The good news: I had an absolute blast. 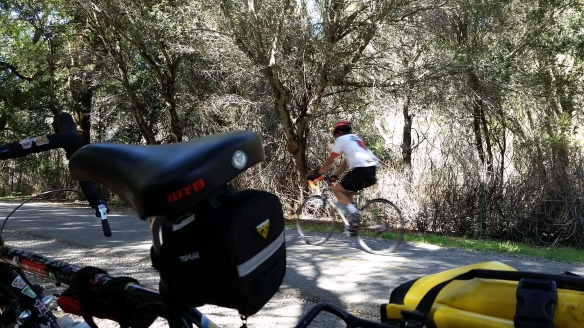 The Sawyer Camp Trail is probably my favorite bike trail. The first time I tried to ride it I couldn’t find it. Somehow it was hidden in plain sight. To five pairs of eyes. Later I found it. It was hiding behind the giant sign announcing its presence and the dozens of people hanging out by the trailhead.

The bad news: I had an absolute blast, so much so that I felt like I was betraying my usual riding buddies.

Not that I think my riding buddies would care. I don’t know why, I just feel kind of guilty. I’m sure I’ll get over it.

So I went over to the beach where the guys surf and looked out at the hundreds and hundreds of people in wetsuits. I figured this hunt might take a while, but proved myself wrong by immediately spotting HB. I don’t know why, he just stood out. Troy and Brooks were still out in the water, but HB and I were hungry, so we munched on healthy oatmeal cookies that tasted miraculously buttery. HB also seemed cold, so I offered him one of the two sweatshirts I was carrying around. There, I knew that I carried all that stuff around for a reason! We were still hungry and still saw no sign of the others, so we figured it was time to hit up Taco Bell.

Ah, the joys of wetsuits and parking lots. I kind of miss it.

And not just any Taco Bell. The best Taco Bell in the world, right on the beach with a walk-up window for people with sandy feet.

Unfortunately, we didn’t get to eat anything there because that’s when Troy texted to say that he and Brooks were ready for REAL tacos and beer at the Mexican restaurant nearby. So after HB extracted himself from his wetsuit and got changed, we went there instead.

Which was okay. I guess. I mean, fresh fish tacos and beer vs. a burrito supreme from Taco Bell? I guess it just depends on your preference.

And then best of all, I didn’t have to ride or even drive back home. 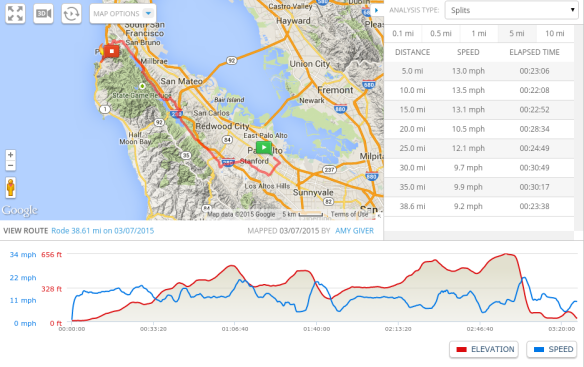 About 39 miles to Pacifica, add on the earlier morning rides I did = 50 mile day!