Day 7. Could it really be Day 7 already? Our last day? 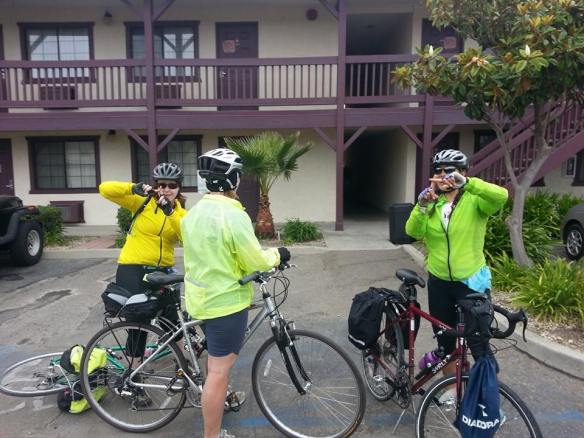 The Chinese character for 7 is not as exciting as the one for 6.

I was so sad that our trip was coming to an end. Erik had predicted that by the end of the trip we would be debating continuing on to Los Angeles. I was all for it! Unfortunately, things like “work” and “money” kept us from being too impulsive.

This morning I put on the new rear light that Erik had purchased for me. This was rear light #3 for my bike, and I’d only had it for a couple months so far. Bad things happen to my rear lights. My first one vanished in a mysterious way. Was it “borrowed”? Did it bounce out of its clip without being noticed? We’ll never know. Rear light #2 was a cheap little number and I was too lazy to install the clip that it came with and just stuffed it into the clip left behind by light #1. Well, it didn’t like that and bounced off on Highway 1. I was aware of it abandoning ship at the time, but was not willing to dive into traffic after it. So Erik kindly enough stopped by a bike shop and got this one for me, and he even attached it to my bike with actual screws! Rear light #3 ain’t going nowhere.

So we started our ride and I immediately got all nostalgic and started taking moody pictures like these: 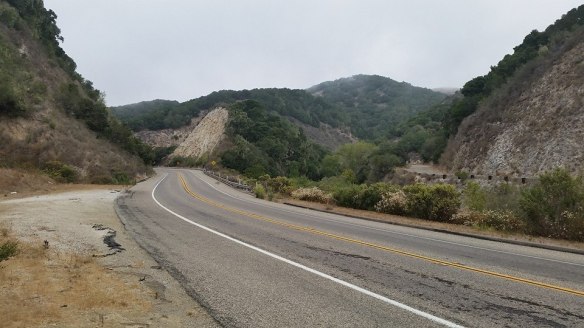 Lots of empty road behind you…. 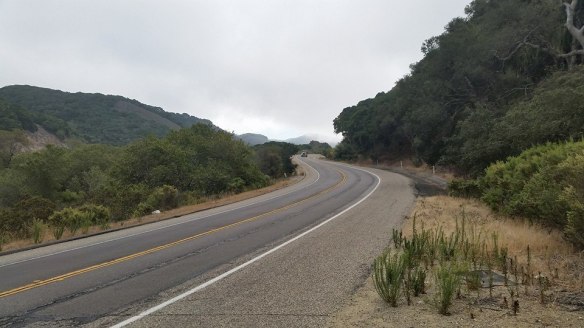 ….and lots of empty road ahead of you.

And I kept wondering if I should I have some wise sayings to utter right about now. Something profound about life, the universe, and everything. Something that could be printed on the above photographs in a font with extra curlicues. Or maybe I should be developing a deep connection with Robert Frost’s The Road Not Taken. I’m reminded of the fantastic Bill Bryson at the beginning of his book A Walk in the Woods. As he talks himself into hiking the Appalachian Trail, he imagines how it would change him.

When guys in camouflage pants and hunting hats sat around in the Four Aces Diner talking about fearsome things done out-of-doors, I would no longer have to feel like such a cupcake. I wanted a little of that swagger that comes with being able to gaze at a far horizon through eyes of chipped granite and say with a slow, manly sniff, “Yeah, I’ve shit in the woods.”

That’s something that I keep waiting for. Well, maybe not the pooping in the woods glory. Been there, done that. All I can say about that is it’s a great way to get a lot of mosquito bites on your butt. But that feeling of self-reliance, the swagger, the eyes of chipped granite that hold so much wisdom – sign me up! When is that going to kick in? Well, perhaps a gorgeous week on a bicycle isn’t quite long enough nor grueling enough for epiphanies about life.

On this day we had some more delightful time on Highway 1, where the highlight of the day was definitely the roadkill. We came upon a wild boar! My two biking companions chose to bike right past it, but I pulled over to photograph the magnificent beast.

My bike did an impression of the boar at first and promptly fell over when I tried to take a picture. I thought that was in poor taste and told it to be more mature. Here my bike is being better behaved.

We definitely need a close up of this guy.

How are there not dozens of vultures surrounding this feast?

The stench almost kept me away, but curiosity and awe won. I find it fascinating that we still have enough open space that creatures like these can still find a place to survive. In fact, they do better than survive – they thrive and are a horrible nuisance on our environment! You can probably guess that they’re not native. Spanish settlers brought pigs to California in the 18th century, and of course some got loose and became feral. Around 1920, someone showed up in Carmel Valley with Russian boars, and those pesky swine quickly took off and found out they had a lot in common with our feral pigs. And I guess some of them must have liked each other, because now these hybrid wild pigs are found in 56 of California’s 58 counties. They don’t belong, though, and they can really tear up a landscape. Hunting is about the only option for fighting back, though I heard that their meat can be pretty gross; apparently even big cats at the zoo won’t eat it. Well, I didn’t have to feel too bad about the poor dead wild pig, but I could at least marvel at it.

Pretty soon our beloved Highway 1 joined up with 101. We were able to hang out at a rest stop that had actually been taken out of service, so no cars could stop there and everything was locked up. But there was a Porta-Potty that very thoughtfully must have been placed there for people exactly like us, even though there are so few people like us. For a while I was suspicious that we were in some kind of horror movie. Couldn’t you just see it? Three cyclists show up at an abandoned rest stop, everything’s locked up tight, the drinking fountains clearly haven’t been operational in years, yet they proceed to go ahead and use the peculiarly well-maintained portable toilet with blind trust. You’re screaming at the imaginary movie screen in your head already, aren’t you? 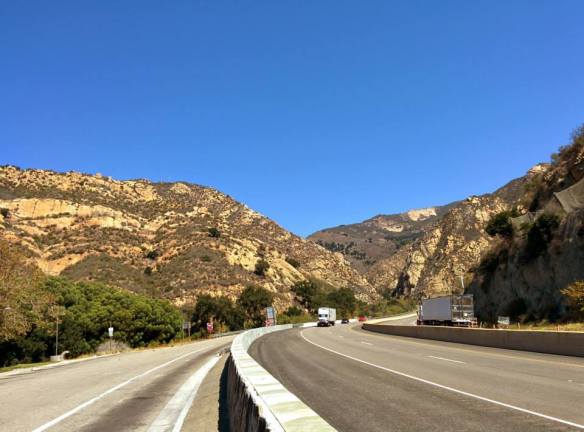 Highway 1 joins up with 101, and it’s really starting to look like Southern California.

Well anyway, needless to say, no ax murderers leaped out at us during our moments of vulnerability. In fact, the only time we really worried about possibly getting murdered was when huge trucks barreled past us. The traffic on 101 was considerably faster and heavier than any we’d dealt with earlier. At some point Sue decided that she really did not want to die on 101 and put in a call to Erik to get picked up. So Erik transported her a few miles on until our exit off of 101, and then she continued on bike from there. Cortney and I stuck it out on 101. We tried to catch up with Sue, but she remained firmly in the lead.

This sign accompanied us for so much of this trip. I knew I would miss seeing it.

So Cortney and I exited 101 together and found ourselves in Hollister, where I received a text from Sue to take Cortney to Spudnuts. Cortney had shared a heartbreaking story earlier that included (or rather, pointedly did not include) doughnuts made from potato flour, but luckily we could do something about that. We had doughnuts and milk and bought a couple extra to share with Sue and Erik. I would love to report that doughnuts made from potato flour are vastly superior to regular doughnuts, but honestly I don’t really like either.

Eventually, we pedaled our way into downtown Santa Barbara! We made it! It was time to start lounging about! We wheeled our way into a coffee shop and got ourselves some iced coffee and crashed into some cushy chairs. 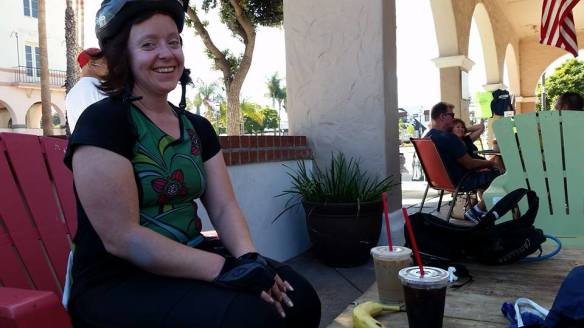 We said we would bike to Santa Barbara and we did it!

All that was left to do was to get over to our motel in Carpinteria. I didn’t want to. I didn’t want this to end. So we took our bikes onto the pier and basked in some of the Santa Barbara beach life. There was some interesting sand art going on. Not content with sand castles, people were making some sand mermaids. They also put some buckets on the sand below the pier with various tacky beach souvenirs to attract tourists’ attention. For some reason people can’t resist throwing money in a decorated bucket. People were pushing each other out of the way to lean over the railing for the privilege of throwing a quarter or dime into the nice buckets. One guy didn’t even have a bucket, just a bulls-eye painted on a sheet. No matter, it was very fun to throw change at that, too. I wondered what kind of turf wars people had when they showed up in the morning to set up their pier games.

Pier life. I’m pretty sure if this pelican opened its mouth, people would try to throw a quarter in it.

We continued down the pier and soaked in the sights and sun and made friends with a pelican. There was another candy store, so we got more cinnamon candy, then reluctantly got on our bikes for the last leg of our trip. I got a text from Sue, slightly worried about what was taking us so long. She had already been sitting around for a while and I suspected she was ready for champagne and dinner.

So that’s exactly what we did when we arrived!

I’m sure I’ve had champagne with Sue and Erik on many occasions, but the previous champagne experience that came to mind as we toasted was the time on a New Year’s Eve about ten or twelve years ago. We had rented an RV to drive to the Rose Parade in Pasadena. We were set up in a parking lot near the parade route and discovered that if we wanted champagne to ring in the new year, we would have to buy it from a crummy little convenience store. So that was how we got a bottle of Cold Duck. It was extremely difficult to open, probably because no one thought anyone would want to try doing that, and when we finally did, we found that the bubbly inside was much improved by the addition of gummy Life Savers. It’s nice to see that we’ve progressed so much since then in our champagne management.

We went out for a nice dinner, too. We treated ourselves to a fantastic seafood restaurant (it was our coastal trip, after all) and had to play pass-the-plates-round-the-table because everything was just too delicious. We all got to drink, too! After a big dinner, a couple beers, and decadent desserts, I couldn’t keep my eyes open and happily slept on my Thermarest on the motel room floor.

So, to wrap things up, I’ll just mention that in the morning we had a fantastic breakfast in Summerland (yes, there is a town called Summerland) where I got stuck in line behind the world’s pickiest man as he got extremely particular about the lemon wedges in his water. 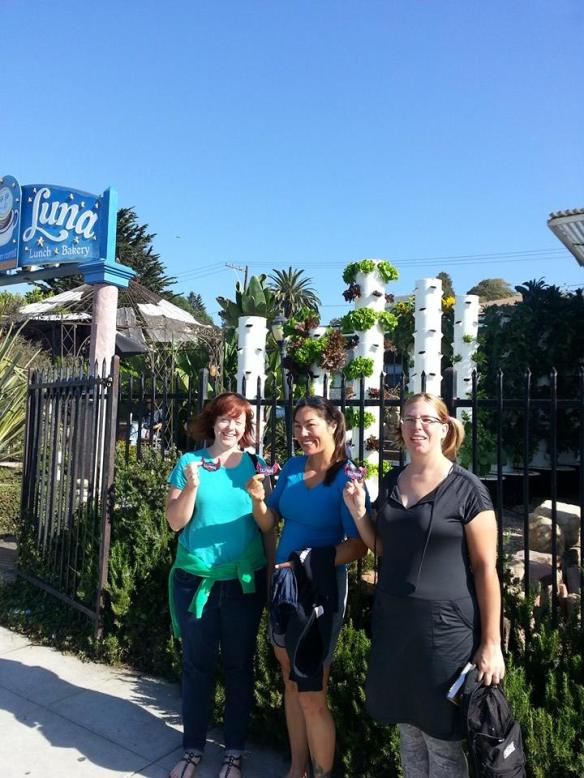 The car ride back up was a little heartbreaking as we sped over all those miles that we fought for on the bike, only to see all our work get undone in seconds. But we distracted ourselves with the cow-counting game*, so all was well. We made it all the way back home in one piece! And we immediately stated planning our next cycling adventure.

*Official rules to the cow-counting game, according to Sue:

We earned these wings.

TL;DR version: It is completed.