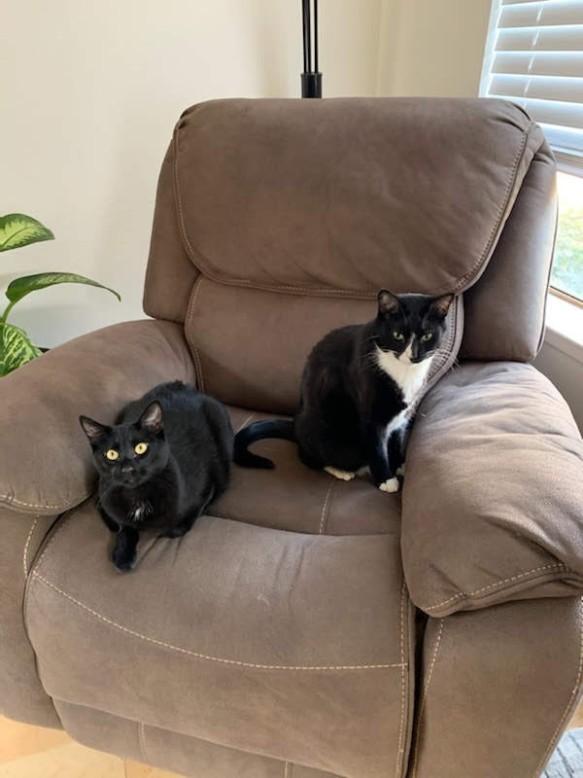 Nibbler and Snowball actually sitting next to each other nicely for once.

I have two rescue cats from the Humane Society. Their names are Snowball and Nibbler. After moving out from my brother and sister-in-law’s house, I just assumed that of course I would get a cat or two of my own. They have several cats, and a life without cats would seem so terribly empty. But it turned out that my roommate Eli and I kind of liked not having the worries and responsibilities of pets. No fur everywhere, no litterbox, far less puking in the corner – for a long while, it was kind of peaceful.

But one day we were sitting on the couch and we wondered, “Where’s our cat?” The absence of a cat sitting nearby was a visible, tangible void. So we got in the car and drove to the Milpitas Humane Society, where we found an aloof and very particular 1.5-year-old tuxedo cat who swatted at us when we didn’t pet her just right. She was perfect! We brought her home.

Snowball cannot believe she’s being subjected to the indignity of wearing bat wings for Halloween.

She came with the name Chloe, but we changed it to Snowball. She doesn’t look much like a snowball, but we were feeling depressed about climate change and had been recalling that miserable moment when a senator brought a snowball into the senate to prove… what, exactly?

I have words that I would like to say regarding this stunning display of willful ignorance, but it was addressed in a far more effective, gentle, and understanding manner by xkcd:

So anyway, we looked at our new cat and thought that her little splatter of white fur was a fine representation of what will pass for snowballs in the future, and so was she named.

After a few months, we were worried that she was painfully bored. Surely, what she needed was a friend! When the Humane Society was having their $20 adoption fee day, we rushed over to bring home Nibbler.

Our discount cat Nibbler as a kitten.

Nibbler immediately hissed at Snowball on their first encounter and that set the tone of their relationship. I was worried that bringing home a kitten was a big mistake. Over time they’ve managed to settle down, though, and once in a great while, Snowball will even give him a little grooming on the top of his head.

Anyway, I didn’t want to just reminisce about how these cats came into my life. There’s a question that I ponder, and it’s this:

As much as I’ve had my fill of discussions starting with Webster’s dictionary describes x as…, I do think that here it might help to agree on what veganism is:

Veganism is a way of living which seeks to exclude, as far as is possible and practicable, all forms of exploitation of, and cruelty to, animals for food, clothing or any other purpose.  – The Vegan Society

It’s up for debate, but at the moment, my personal short answer to whether owning cats is vegan is Yes. Gallons of digital ink have been spilled discussing this topic – I’ve read some of it, and surely there is lots more I haven’t read. So perhaps my feelings will change as I learn more, but my current stance is that we owe something to the animals we have domesticated and bred to suit our desires and aesthetic whimseys.

What do we owe them? In my opinion, for the existing animals, we owe them a chance to live their lives in the environment for which they have been adapted without needless suffering. We’ve bred them to be household pets, and household pets they should be. As for any proposals to let them go to “be free,” I think it is cruel and unrealistic to expect them to survive in the wild or on the streets when we’ve explicitly bred them to not fit those environments anymore.

Here’s the problem, as I see it: we are failing in our duty to provide these existing animals with the opportunity to live as household pets. According to the ASPCA, around 6.5 million pets are going into shelters every year in the US, and 1.5 million are euthanized. What do we owe these animals that are suffering so needlessly? I sincerely believe that we owe it to them to end their suffering right where it started – with their exploitation through selective breeding done purely for our enjoyment.

My long answer and proposed solution: No, it’s not vegan to own cats because it’s not vegan that we have pets for recreation at all. Stop any further propagation of breeds that should never have existed in the first place. Spay and neuter, cease the procreation, and let household pets become a thing of the past.

However, I suspect that the day when household pets go extinct will probably never come. In the meantime, there is a subproblem I’d like to mull over, which is:

As a vegan, should I feed my cat meat?

Veganism is a way of living which seeks to exclude, as far as is possible and practicable, all forms of exploitation of, and cruelty to, animals for food, clothing or any other purpose.  – The Vegan Society

Did you see it? The source of all confusion? As far as is possible and practicable, there it is!! How can that not mean different things for different people?

Nibbler is confused by his spinach, tofu, and barley lunch.

With that simple phrase and how I interpret it, I think there is an obvious answer to whether a vegan should feed their cat meat, and it is Yes. Free From Harm goes into more detail, but basically, cats are likely to fail to thrive on a vegan diet. I’m almost certain that vegans do not deny that the food chain exists. And so I think we’ve reached the limits of possible and practicable when considering excluding meat for cats.

Given that I’ve already expressed my opinion that we owe our existing companion animals the right to live out their lives as household pets, and given that cat physiology demands meat, we need to find a way to provide meat to cats with the least amount of suffering. We know that allowing them to hunt for themselves can wreak havoc on the populations of songbirds and other wildlife. Given that slaughterhouses still exist, producing meat for human consumption, it only makes pragmatic sense to use undesirable pieces for pet food. As horrid as the meat industry and slaughterhouses are, would it reduce the suffering of the animals that go through them if their undesirable pieces were not fed to pets?

I might be naive, but I believe that a world where slaughterhouses don’t exist is probably the same world where household pets don’t exist. Therefore, I do not think that – outside of maybe a few fringe fanatics – we’ll find ourselves in a world where we are killing animals just to feed our pets. As long as there are slaughterhouses, I do not see any reduction in suffering by refusing to use their undesirable pieces. If I am wrong about this, I would love to understand why.

(I suppose the argument could be made that using the undesirable pieces saves the slaughterhouses and meat industries from taking a hit with that loss, but that’s when we have to quantify the amount of suffering in different scenarios. I do not know how this is done, but given that the alternative to using the slaughterhouse undesirables is killing an entirely new group of animals, my gut instinct is to use the undesirables.)

Does it hurt to think that I promote the loss of household pets like dogs and cats from our world? Sure it does! They’re such a part of normal life, and not having them would be a great loss. But you know what? Just like we made cats and dogs adapt to our lives and cultures, we can adapt ourselves to their absence.

Nibbler wants to know why you don’t stay home and play all day. And why he got neutered.

1 thought on “Musings on my cats”