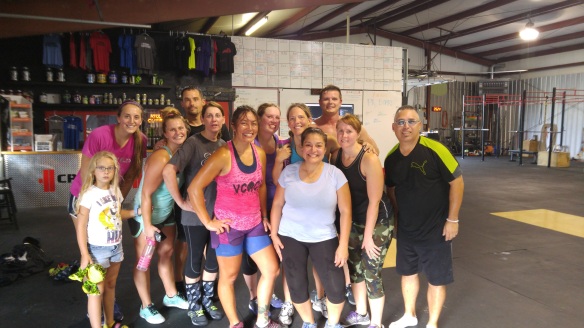 Many apologies for not writing more frequently, but such is life on the Soggy Edge.

This post will have to be a bit different from the others. I’m not going to take the time to write about everything that’s happened, so I’ll have to just pull a few select tales. Besides, the chronological travel log style is not really the kind of writing I had hoped for myself, so this will be a break from that.

Also, the heat and humidity and general rugged lifestyle is destroying my electronics. This computer is driving me nuts. I never know where my cursor is and it unexpectedly jumps to random places. And the struggle for decent wifi continues. There will be no uploading of photos, because it drives me to tears. (Update – I’ve now come back and added photos.)

But enough griping. Let’s see what I can do.

Last I left off, I was in Denver. I’d ridden there with James, but now he was back in Albuquerque and I was riding by myself. Soon I would be on the TransAmerica Trail, which would be the start of a new era for me. Leaving the mountains for the flat expanse of Kansas with all its tornadoes actually had me a little nervous, and I took every opportunity I had to delay. And thus was born my new strategy for spreading the word about Be the Match: No longer would I feel like I needed to have a Swab and WOD event planned ahead of time. Instead, I just started showing up at CrossFit gyms. In this manner, I visited CrossFit 719 and Progressive Fitness CrossFit in Colorado Springs.

A great turnout for the Independence Day workout at CrossFit 719 in Colorado Springs.

And so now I’ve learned that I rather like dropping in on CrossFit gyms. They can’t ignore me when I show up in person! And since I’m not occupied with swab kits, I get to wod! And when I wod, I have a lot of fun and make new friends! And friends are supportive of your efforts to raise awareness for bone marrow donation. So I’ve switched my focus over to my online drives, and I’m hoping that my more frequent CrossFit stops make up for not having swab kits on hand.

My coach and hostess and movie companion from CrossFit Receptus in Pueblo.

And so I took my new strategy to Pueblo. I fell in love with Pueblo’s CrossFit boxes, where I got my butt kicked at Devil Dogg CrossFit and CrossFit Receptus. The coaches there were tough, but also so welcoming! They easily convinced me to spend an extra day in Pueblo. 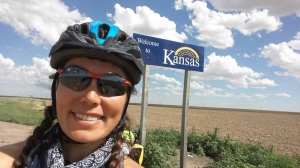 This is the most fake smile ever. This was right when the biting flies were at their fiercest.

Then I moved on to Kansas. People often joke about Kansas being flat and boring. I object. Flat it may be, but it’s not boring! Nothing boring about finally getting in 100+ mile days! Plus, being on the TrasAm meant that I met a lot more cross country cyclists. It was a nice change of pace to have people to ride with. And all the little towns along the route were extremely welcoming, allowing us to camp in their city parks and to use their pools and showers.

Claudia is from Italy! We didn’t have much vocabulary in common, but she still managed to push me to cover 115 miles in one day.

But then there was Larned. A crowd of us left Ness City around 5:00 in the morning in order to escape the heat of the day. It was stupid hot, reaching temperatures I didn’t even know were possible. One guy showed me his phone claiming that it was 117ºF. Is that a thing? How can that possibly be a thing? Well, either it’s a thing, or it was hot enough to make the phone malfunction. Either way, it was really hot. So starting before the sun came up seemed like a smart thing to do. So we rode to Larned and were done with riding before noon. We crashed their little park and soaked in their pool. That evening I hung up my  hammock and thought about setting up my tent as a backup plan, since it looked like rain was coming in, but I fell asleep. So I woke up to rain and lazily tried to ignore it, but eventually it got bad enough that I crawled out of the hammock, blew up my Thermarest, and tried to just sleep on the floor of the pavilion, thinking that the roof would be enough protection. Another cyclist had a similar idea and was sleeping in his tent without the rain fly under the pavilion. Fortunately, the wind had kicked up, so there weren’t any mosquitoes bothering me.

But then the wind really kicked up. It was a large pavilion, but the rain was coming in sideways and quickly soaked the two of us. It was way too windy to try to set up my tent or attach his rain fly, so we made a mad dash for the bathrooms. It’s just a tiny one-room bathroom, but we squeezed the two of us in there and waited out the raging storm for a couple hours in there. It was a miserable experience. We sat on my wet Thermarest in our soaking wet clothing with the smelly toilet as our close companion and thought about our poor decisions.

In the morning, the smart cyclists who had set up their tents with rain flies got up and proceeded on. This other guy and I finally got to sleep instead. Eventually we made our way to Nickerson, where we found out that they had suffered a tornado the previous night. We had caught just the edge of it. And that was my introduction to the reality of tornadoes.

From then on I was pretty paranoid about tornadoes and sudden storms. It was so hot that sleeping in the hammock was awfully tempting, but I wanted the comfort of my tent, just in case. One day the weather forecast said there would be no rain that night, but I didn’t trust it. “Go ahead and sleep in the hammock!” my new friend said. “Live on the edge!”

“Pfft. The soggy edge,” I complained, peering at the sky suspiciously.

And that’s life on the soggy edge. 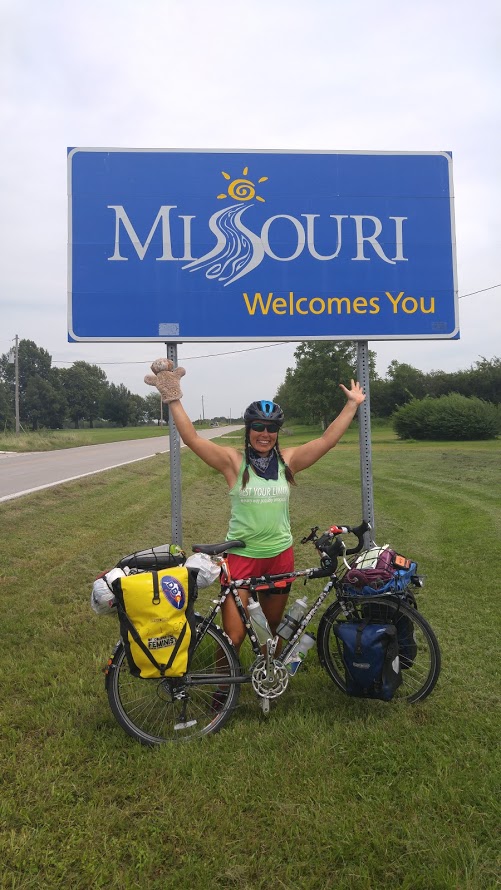 Missouri! And with it come the Ozarks! The hills are back! Yay….

This didn’t look like a storm. This looked like someone turned the gravity off so the ocean floated up into the sky, and then this person’s supervisor came along and flipped the gravity back on, making the problem much much worse.

One day in Kansas I was right on that edge, riding along, enjoying a tailwind, until I looked behind me. And the sky was unlike anything I’d ever seen before. It was like there was a hole in the sky, and all the clouds were swirling around that hole and being sucked up into it. The horizon was dark with rain coming down. I panicked. I tried to take advantage of the tailwind and ride away from it, but soon another similar scene formed in front of me. Then the lightning started. I got an alert on my phone. “The nearest lightning strike in the past 30 minutes was 0.0 miles away from you.” Find shelter! Find a ditch! All the friendly advice from locals for just this situation echoed in my head, but all I had in all directions for miles around was grass about three inches tall. I was certain I was going to be struck by lightning. Was that a tornado forming behind me? In front of me? Did it matter? I was just going to get struck by lightning anyway. Or was I overreacting and should just set up my tent? Thunder rumbled and shook me to my core. When a trucker came by, I couldn’t help it, I flagged him down. 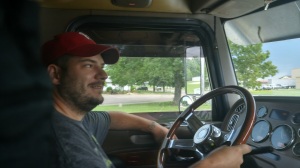 He calmly looked behind us. “That’s just a big storm.” He looked ahead of us. “That one could be a tornado, yeah.”

“What would you do if you were me?” I asked him.

So I got in the truck. We lashed my bike down behind the cab with just one bungee cord as the wind and rain hit us and got out of there. He dropped me off in the next town about 15 miles down the road, and I waited until the thunderclouds ahead of me calmed down. I probably overreacted. But I’m okay with that.

My friend Regina and me in Chanute, Kansas. She lives up by Kansas City and drove down to camp with me for a night. She brought ribs and beer! The next day we went swimming at a lake.

Push the button to call the ferry! 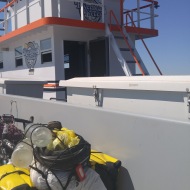 Lutz on the ferry crossing the Mississippi from Missouri to Kentucky.

Lutz and me standing by the Mississippi.

Waiting for the ferry. It took a while. Cyclists are low priority. Had to wait for a car to arrive before the ferry would cross.

Other momentous things that have happened: meeting up with my friend Regina, who I worked with in Thailand; crossing the Mississippi River on a ferry; having 32 mosquito bites on my upper right arm alone; seeing my sister and my dad in Kentucky and enjoying whiskey cocktails and Mammoth Caves with them… Kentucky has been less soggy so maybe it should be in a separate post. Well, here’s a photo of my campsite at Land Between the Lakes. 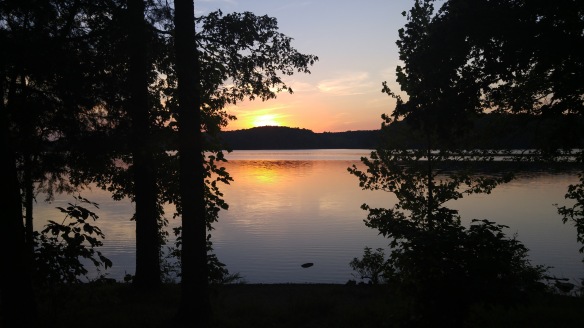 Energy Lake campground at Land Between the Lakes.

And here’s Lori and me drinking cocktails in Louisville.

Here we are at The Brown Hotel. Lori, of course, has a Manhattan. I opted for the mint julep.

Oh, and there’s been lots more CrossFit. Such as in Cape Girardeau. And in Newton, Kansas. And in Wichita. And in Springfield, Missouri. And in Bowling Green. And more! 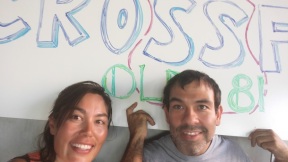 At the moment I’m in Tennessee. Cookeville, to be exact. I’ve veered away from the TransAm. And yes, I know. Rich Froning! I’ll have to see what I can do about that. But right now I’m about to throw my computer out the window because it insists on deleting everything I type, so I’m quitting now.

1 thought on “From Denver to Cookeville, aka The Soggy Edge”