Lots of people have been asking me about how I’m getting ready for my ride across the country.

I’ll get into that someday soon. There are lots of things to talk about. But right now I’m thinking about food. Proper nutrition is big on my mind as I think about getting as fit as I can for this journey.

I like to eat healthy food. Now, what does that mean?

I’ll stress that I like to eat healthy food. That doesn’t mean I always do. But sometimes I put my mind to it and I’m totally dialed in and I eat what I consider to be amazingly healthy food.

So that brings us to the next question. What is healthy food?

That’s another question I’m going to dodge for now. There are all kinds of ideas on that. I’ll just say that I think I have a pretty good idea about what works well for me and what doesn’t. It might not be the same for you.

Healthy eating can include a tallboy during a bike ride, right?

So, more specifically, what I do want to talk about is food preparation. In order to eat healthy food, a large part of the challenge for me is having healthy food available. There is just no way that I’m cooking every day. I don’t mind the cooking so much. I mind the preparation and the clean up. Especially the clean up. So I try to get large bouts of cooking done at once. I put in a lot of investment on, say, a Sunday, and then I don’t have to worry about it for three or four days. Maybe longer if I strategically sponge off my sister!

But sometimes I think that I can be one of those people who throws together food at a moment’s notice. How hard can it be? 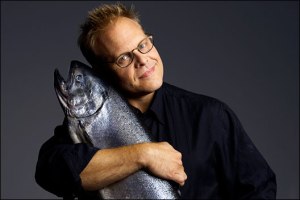 I love Alton Brown. To be more precise, I love his show Good Eats (now available on Netflix!) I haven’t watched him much in his other roles, and they hold little interest for me. But when I watch Good Eats, I get inspired. He makes cooking look so easy! And I know, I know, it’s television. He’ll even joke during the show itself that everything comes together far too magically. He’ll do something like blatantly throw an onion into the fridge, and the fridge will spit it back out at him nicely diced, and then he’ll say something about how his fridge is also an excellent massage therapist. No, just kidding about that last part, but obviously we’re meant to realize that things will not be so easy for us should we attempt his recipes. But still. It looks like it shouldn’t be that much work to throw together a meal.

So a few days ago I had a couple hours between things and I decided I really wanted some spicy soup. I couldn’t stop thinking of a nice Thai tom kha soup, and I remembered Alton Brown having a pretty easy recipe using catfish. I’ve been meaning to eat more fish, plus catfish is a sustainable fish farmed right here in the U.S. Filled with an exhilarating mixture of patriotism, environmentalism, and culinary multi-culturalism, I set off to purchase my ingredients.

Here is Alton Brown’s optimistic recipe for tom kha pla, or as he calls it, catfish soup: 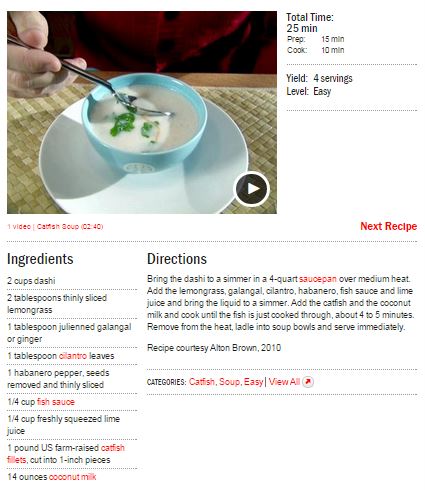 Let’s go through how this plays out in real life, shall we?

First of all, two troublesome ingredients:

2 cups dashi – Oh, no problem, let’s go to Ranch 99 and pick up some instant dashi! I live in the multicultural Bay Area, surely the Chinese market will have that! No? Oh… well, dashi is made out of kombu and bonito flakes, right? Okay, let’s look up how to make our own dashi. I’ll just fire up my phone and hop on the Internet… yup… just hopping on the Internet… gonna Google the squeeze out of this… just need a quick dashi recipe… need a time estimate… oh nevermind, let’s just buy the kombu and bonito flakes and go, how hard can it be?

1 pound US farm-raised catfish fillets – Ranch 99 has whole US farm-raised catfish. Guess I’m buying a whole fish. Which doubles my recipe. That’s okay. Let’s ask the fish monger guy to fillet my catfish for me. Hm, whoops, I got steaks instead. Skin and bones included, huh? Well, I’ll deal with that, how hard can it be?

Next up, the procedure:

Okay, let’s bring that dashi to a simmer. That means I need to look up how to make dashi.

No big deal, just an extra hour of cooking.

That looks easy enough. But that is an extra hour that I wasn’t planning on using up. Well, fine, I can multi-task and chop up the other ingredients and clean the fish of skin and bones in that time. That’s easy, right?

Ha! After chopping up lemongrass and galangal and squeezing limes, I take out a boning knife and immediately start making a mess of my poor fish. About an hour and a half later I think I have about a pound of fish in a messy little pile and about another pound of fish still stuck to bones and skin and splattered on the counter. I had doubled all the other ingredients, expecting extra fish, but I had to give up on the idea that I was going to salvage much more. And now I wonder what I’m supposed to do with the unwanted fish parts. I can’t throw it in the trash, it’d sit around and get smelly for a couple days. So I tie it up inside several plastic bags and put it in the freezer. I figure on trash day I’ll take it out to the outside trash can and it will be removed before it has a chance to get smelly.

Anyway, I manage to finish making the dashi without too much extra trouble. Straining it was kind of a hassle. I thought that I could be clever and used our pasta pot with the built-in straining lid lined with cheesecloth. And honestly that worked okay. But then it took me several minutes to undo the locking mechanism on the pot afterwards, because apparently it’s not designed to have layers of cheesecloth wedged between the pot and the lid.

Well anyway, by this time I clearly wasn’t going to finish making this soup in time. So I did not have soup for lunch that day, just microwaved chicken. I had to run out of the house and get back to CrossFit for a few hours, but that’s okay, I could come back and make the soup for dinner.

Yup. Sadly, I could eat much more of this than I could of tom kha pla .

And I did that without too much trouble, too. But since I had doubled the recipe, I had a whole lot of soup. And as much as I like tom kha pla, there is a reason why you only get a tiny bowl of it at a restaurant. With all the lime juice and coconut milk, it’s best consumed in small doses. And then there’s the fact that there’s fish in it! As much as I feel kind of smug eating nicely poached US farm-raised catfish, I kind of wish that it was chicken, or at least breaded and deep fried.

Anyway, remember the bag of fish parts that I left in the freezer? So on trash day I actually remembered to take it out of the freezer and deposit it in the trash can on my way to CrossFit at 5 am. Yes, I worried that a cat or a raccoon would smell it and want it. But it was frozen! And it’s cold out! Wouldn’t it stay unsmelly for a couple hours until the trash collectors got there?

Apparently not. Later that day, after the trash collectors had been and gone, I was treated to the sight of some strange stuff sitting in the street in front of our house. I felt my stomach sink. And sure enough, upon closer inspection, it was several plastic bags torn open with a trail of fish fins, fish bones, fish skin, and a lovely fish head scattered and smeared down the street. In addition, a bag of our disposed kitty litter was also scattered down the street, Tootsie Rolls and all. So I donned gloves and started scraping our garbage off the street. I was not willing to rebag and refreeze the fish parts, so I tossed it in with the kitty litter that I also replaced back into the trash can. And so my attempt to avoid having fish sit in the trash can for a couple days concludes as having fish sit in the trash can for a week. And, bonus, we have a smear of fish and kitty poop on our street.