Since my bike’s been stolen, I’ve been spending a lot of time moping. 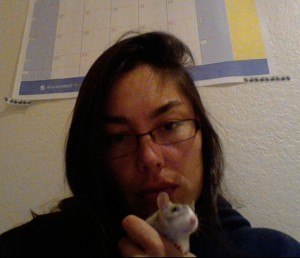 When I’m sad, I cuddle with a rat.

It’s okay, I have permission to do so. In fact, my project manager (who also happens to be Sue) instructed me to do so. It’s true. She wrote it on the weekly blue sticky note of tasks. “Time to mourn and regroup.”

But I need to bounce back. I’m doing a ride next year for Be the Match, for heaven’s sake. These setbacks cannot get in the way!

I went to my parents’ house and rustled around in the garage to find any bikes that might be lurking in there. I found an old Novara that needs some work, and I figured that it’d be great to put some of my newly learned bike maintenance skills to work. So I tossed it into the back of my car. When I got home my neighbor brought out a bike that’s been hanging around his backyard for twenty years. Underneath all the dust you can see that it’s a Peugeot. He said I can fix it up and then decide if I’d like to buy it from him. So I’m thankful for these distractions. I started to think that I could be one of those people with a garage full of old bikes, none of them fancy or expensive, but each with its own personality, its own story, and some of my own handiwork. I like that idea. Today I put a couple hours into the Novara and hope to be riding it tomorrow.

But of course I still want my Surly back.

Meanwhile, on a completely unrelated note, my brother managed to bring another kitten into the house. A little bit of background on that: we already have many cats. We have seven cats. But what could he do? It had gotten cold and the little kitten had moved into his engine block to stay warm. We couldn’t very well leave it there, could we? So now we have this kitten living in our house.

Now that he’s gotten a clean bill of health from the vet, he can come out and socialize! So my friends Kat and Hai Yue asked if they could come over to see the little guy, and of course I said yes.

We spent lots of time playing with the kitten, but not before they gave me the biggest surprise I’ve ever received.

I’m at the gym all the time! How did they all manage to sign this thing behind my back?

I couldn’t hold back the tears as I saw that they had brought me a homemade card crowded with signatures. There were pictures of myself with people from our CrossFit gym and my bike. They had managed to keep this a secret from me and I’ll never know how! I had just seen most of these people, and not one had dropped the slightest hint that something was up their sleeves! I was deeply touched, and honestly that would have been enough to drag me out of my funk, but it didn’t end there. I couldn’t believe it, I just didn’t think that things like this could happen in real life, but sure enough, there was also an envelope with enough cash inside to replace my bike, my saddlebags, my cycling gear… everything. Their generosity is ridiculous. I can’t possibly feel like I deserve this. Kat and Hai Yue immediately informed me that I’m not allowed to give it back. They had put out an email to a few people to see if they would like to help me replace my bike, and apparently it got forwarded on, and in just a couple days dozens of people had responded.

I can buy a bike! Even better, I have amazing friends! That’s happiness!

There are some moments in your life when you feel like you’re seeing the world for the first time. Certain facts about life become crystal clear and so simple. This is one of those moments for me.

People care about me. They really do.

People value this journey that I’ve set out to do.

People want to see me succeed.

People believe in me.

I’m sure on some level I already knew all that. But I’m just as guilty of forgetting to count my blessings as the next person. Today, though, I received this opportunity to learn these truths all over again, and they have sunk in.

Truth: My friends are the best people in the world.